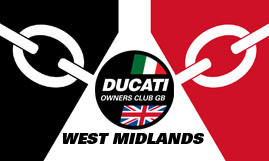 The Boycott Arms, Upper Ludstone, Claverley WV5 7DH. Just off the B4176 Dudley to Telford Road

The branch began in March 2008 after an open day at Ducati Wolverhampton, myself & Richy Curzon were the last two there at the end of the day when it was suggested that we needed a branch in the West Mids, so we sort of volunteered by default!

The first meet was the following week, and we’ve been meeting up for ride out etc ever since.

We do monthly Tuesday evening meets in winter September until March, then form April until August we do fortnightly Tuesday night meets, if weather permits we do a short ride out.

When weather permits we do Sunday rideouts which are organized ad hoc, we use our facebook page West Mids Facebook to alert members to when these will be happening so if you want to come along, ask to join and keep an eye out here, our rideouts and meets are open to non-members.

A few photos of our exploits are to be seen below.